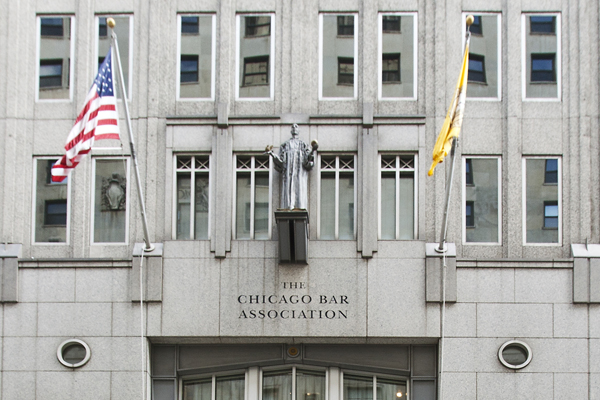 The Bar Association of Chicago is one of the country’s largest lawyers’ groups in the United States.

Located in Chicago’s downtown or “Loop,” at 321 South Plymouth Court, the Association has served both attorneys and their prospective clients since its formal incorporation in 1874.

Are you looking for a Chicago lawyer?

One of the primary functions of the Bar Association is to connect prospective clients with an appropriate attorney. If this is you, you can simply call them at (312) 554-2001; or alternatively, you can visit the Association in person. Be prepared to tell them what your legal issue is and/or what area of expertise you are looking for. For example, are you looking to defend yourself against slander or libel (also known as defamation of character)? Are you contemplating a divorce? Do you feel that your privacy has been invaded? Or are you facing an entirely different issue?

In any case, be advised that there are only two officially recognized legal specialties: admiralty law (i.e. ships and seafaring) and patent law. You may have heard that someone is a “family lawyer” or a “criminal lawyer” or a “personal injury attorney.” None of these are official designations. They merely indicate that the attorney involved has chosen to limit his or her practice to a specific area. In other words, a person who calls themselves a “divorce attorney” could legally also represent a plaintiff in a personal injury case, but probably would politely decline to do so as a personal choice.

Lawyers typically indicate to the Chicago Bar Association which areas of the law they choose to focus on. Then, when potential clients call, they can be directed to someone with both the expertise and the desire to help them with their particular legal problem.

Chicago, of course, is one of the best known cities in the world. With a population of over 2,700,000, it is the 5th largest city in all of North America.

Tourists flock to Chicago for many reasons. It boasts great museums (such as the Art Institute of Chicago, the Field Museum, and the Museum of Science and Industry). Sports fans love its two rival Major League Baseball teams, the White Sox and the Cubs, as well as its professional football team, the Chicago Bears. Its Lincoln Park area is known for both exclusive houses, apartments, and condos as well as nightlife that extends well into the wee hours of the morning. And its colleges, such as the University of Chicago and Northwestern University, rank as some of the best in the world. As home to some of the world’s tallest buildings, best known restaurants, and best loved theaters, Chicago truly has something for everyone.

And the attractiveness of Chicago doesn’t stop at the city limits. The metropolitan area, which is usually referred to as the “Chicagoland,” is considered by many to be an ideal place to live and raise a family. The area along Lake Michigan starting in Evanston (which borders on Chicago) and extending northward to Winthrop Harbor (which borders on Wisconsin) is known as the “North Shore” – a term which to everyone familiar with it is synonymous with elegant (though very expensive) living.

The entire area is served by O’Hare International Airport, which for years has been ranked among the ten busiest airports in the world.

In short, it’s hard to find anything not to like about this city, except, perhaps, for one thing: the weather. It can be very hot in the summer. Spring and fall, while pleasant, are relatively short. And many will say the winter is horrible: long, terribly cold, and dreary. But Chicago’s many advantages outweigh this “minus” for most people who get to know the city.

More about the Bar Association of Chicago

The building housing the Association is jointly owned by it and the John Marshall Law School. Visitors have access to the Law School’s extensive Law Library, which houses over three hundred thousand (!) volumes. There is also a bookstore offering a variety of books on various legal topics.

Licensed attorneys are not required to join the Bar Association in order to practice law. Nonetheless, most attorneys choose to become members because of the referrals the Association generates, the opportunities for ongoing continuing legal education, and the “networking” and camaraderie which it provides both in person and through virtual connections.

As mentioned above, if you need a lawyer and don’t already have one, the Bar Association stands ready to help you. They will match your needs with an appropriate attorney and give you his or her contact information. Then, it will be up to you to make contact.

The legal system in Chicago

Courts in Chicago are governed both by Illinois laws, statutes, and regulations, and those of the county in which the city is located, namely Cook County. (Incidentally, unlike some municipal counties, for example Pennsylvania’s Philadelphia County, the city and the county are not essentially identical. Cook County is much larger than Chicago and encompasses many suburbs as well, whose residents also have a say in the governance of the County)

The Cook County Court System today is the biggest unified court system worldwide! It employs over 400 judges and many more court officials of all types.

Sometimes, finding the proper venue for a court case, especially in the sprawling Cook County System, can be tricky. Your attorney will certainly be familiar with all the ins and outs of venue and know where motions should be filed and proceedings should be held.

Illinois law is typical for that of many midwestern states founded around the same era, but don’t just assume that you know the specifics. Instead, we recommend that you depend on a competent attorney rather than hoping that you understand the law yourself.

So don’t be intimidated by the size of Chicago and Cook County, and don’t leave your legal issues to chance. Instead, take advantage of the Bar Association of Chicago to help you find an attorney who will be able to navigate the system and work within it to your advantage. Thousands of others have done so before you!